Top
Our weekend anniversary trip has come to an end sa

Anyone else counting down the days until school st

Shout out to @enterprise for hooking us up with a

I could never in a hundred summers get tired of th

If you’re working on booking your trip to Orland

So when the @medievaltimesaz opened here in Scotts

Heading to downtown Portland I knew that VooDoo Doughnuts were going to be one of our first stops. Not only have I seen lots of people rave about it but the doughnuts are super trendy and different. However, when I did some research about their doughnuts I found lots of people stating that Blue Star Donuts were where its at and that they dominated VooDoo so clearly the competition with my taste buds was on!

Since we were walking from our hotel, we decided to stop at the closest shop first so Blue Star Donuts it was. The bakery was small with very little seating but new and had a very clean look to it. We waited in a short line to see our choices which were few but smelled amazing! We chose 4 different donuts for a whopping total of $16 and then made our way outside to eat on the street. 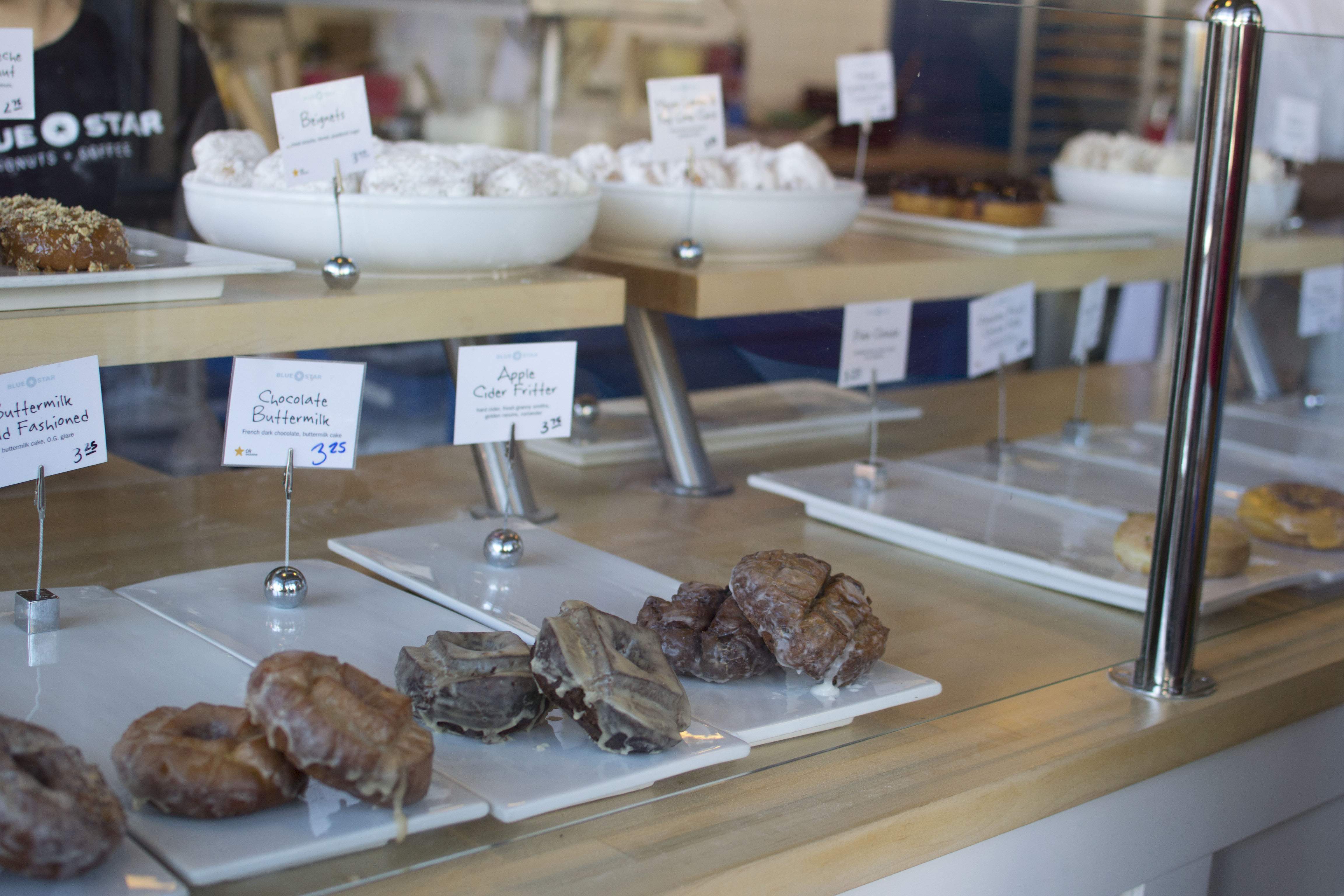 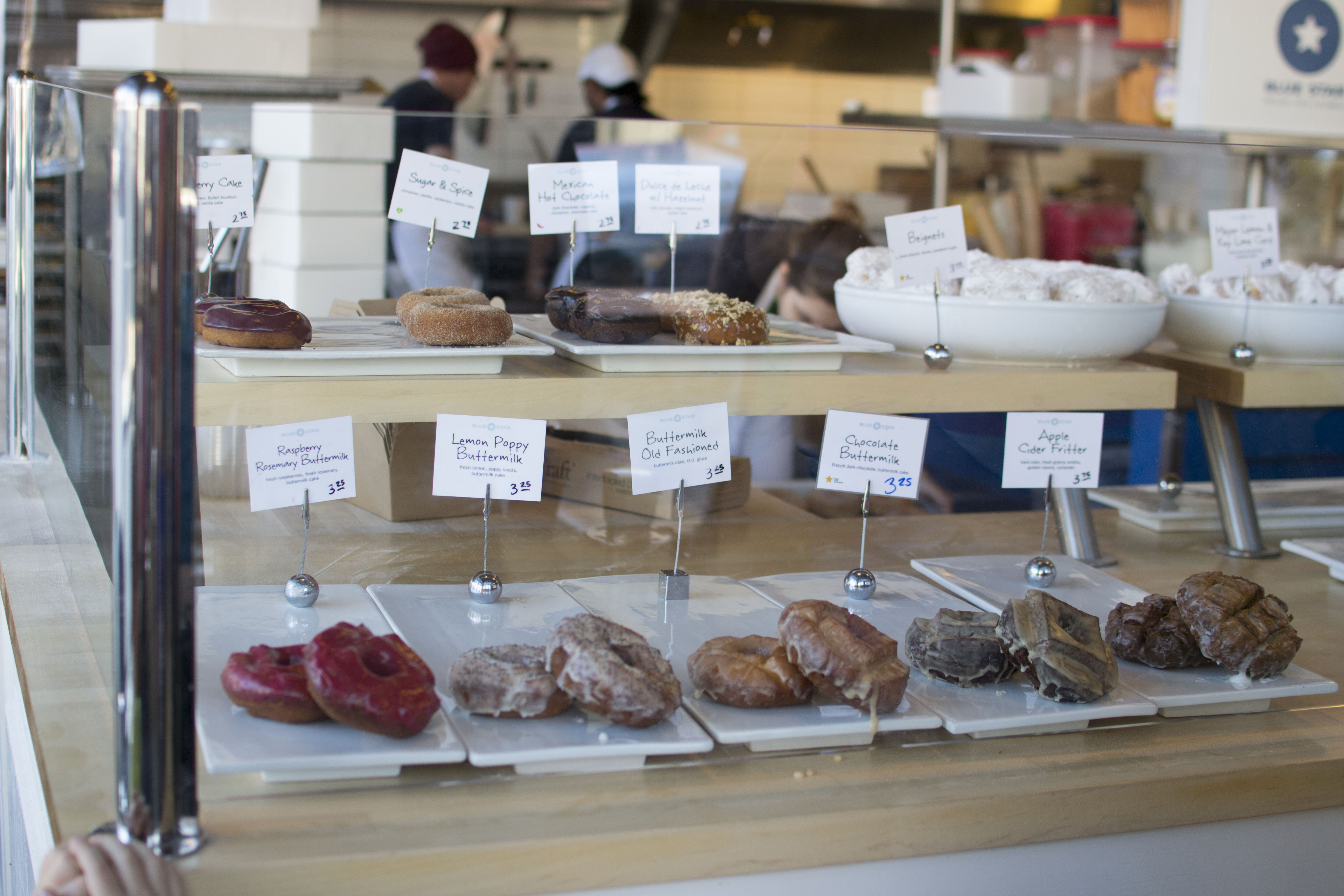 I personally chose a lemon poppyseed buttermilk donut as I’m an addict when it comes to lemon and poppyseed anything. The donut was very fresh and tasty but very heavy and filling since its a buttermilk donut. Next up was a maple bacon donut which was pretty tasty then the list continued with an original buttermilk and finally an “OG” donut that had an interesting taste. I wasn’t a big fan but my husband and boys liked it.

Getting our doughnut on in downtown Portland today!

Next up was VooDoo Doughnuts to see if they could rival Blue Star at all. We headed a couple of blocks further until we spotted the pink gated line to doughnut heaven number two. The line wasn’t terribly long but longer than we expected for 10am on a weekday. We waited a total of 20 minutes next to their glitter painted walls while the line behind us grew immensely longer. 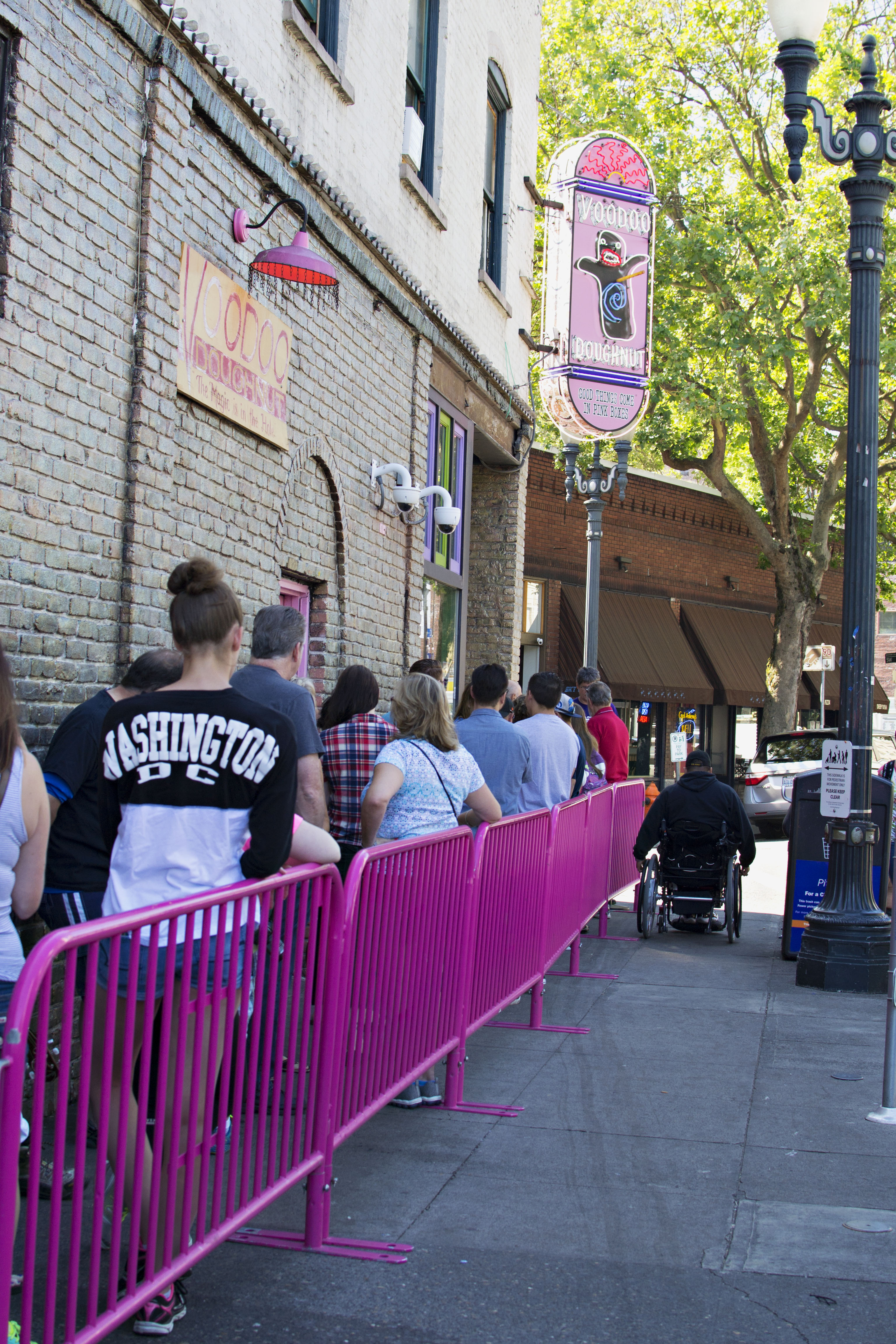 Since we knew that VooDoo offered a lot of choices, we looked up their menu online to get an idea as to what we wanted to try. Oh and huge tip! They take cash only so make sure you come prepared or that you run over to one of the two ATM’s across the street. Once we rounded the corner into the bakery itself we were entertained with all the colorful decor and metal music playing in the background. They also had their doughnuts on a rotating display which made it easier to visually see how huge their doughnuts really are. 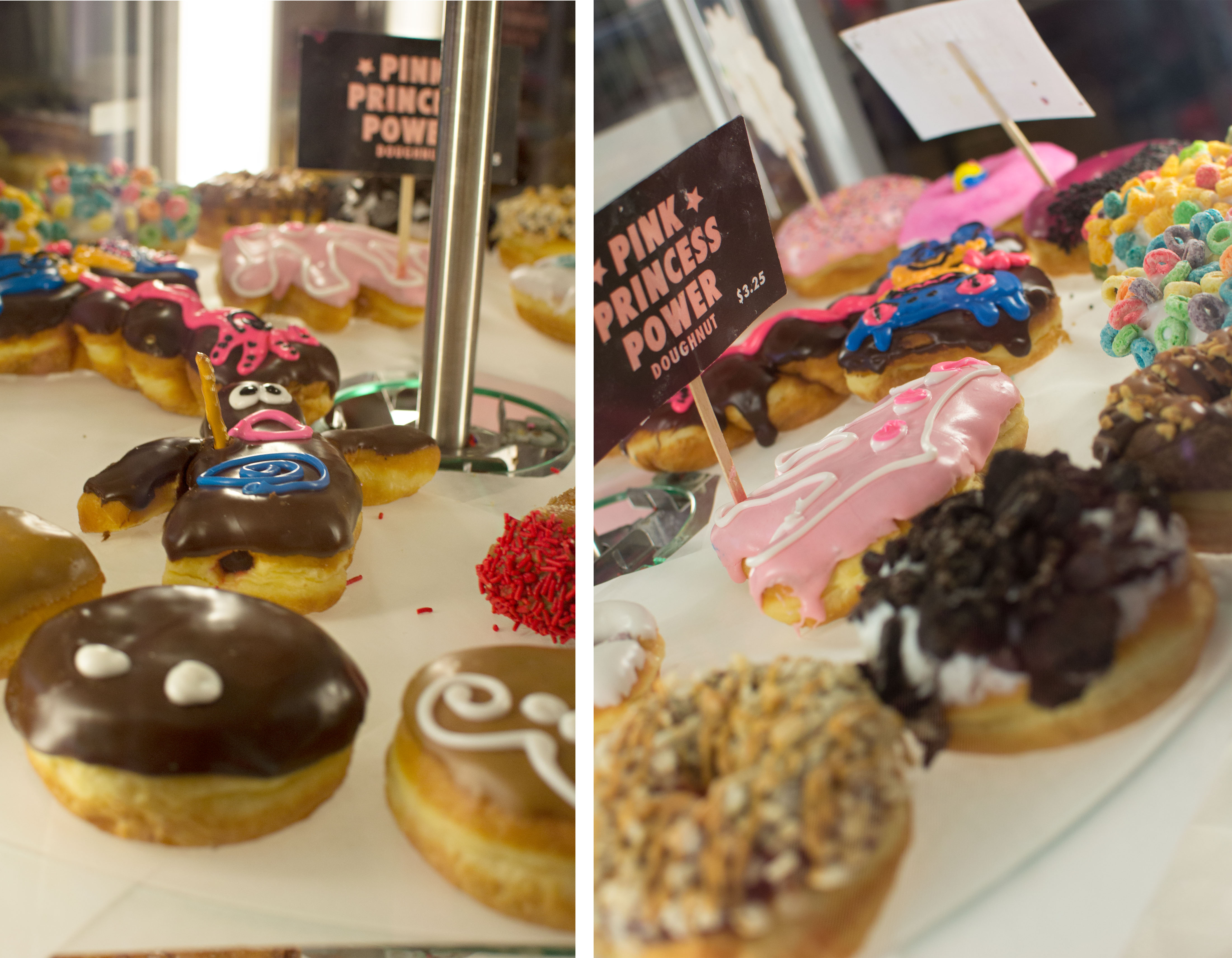 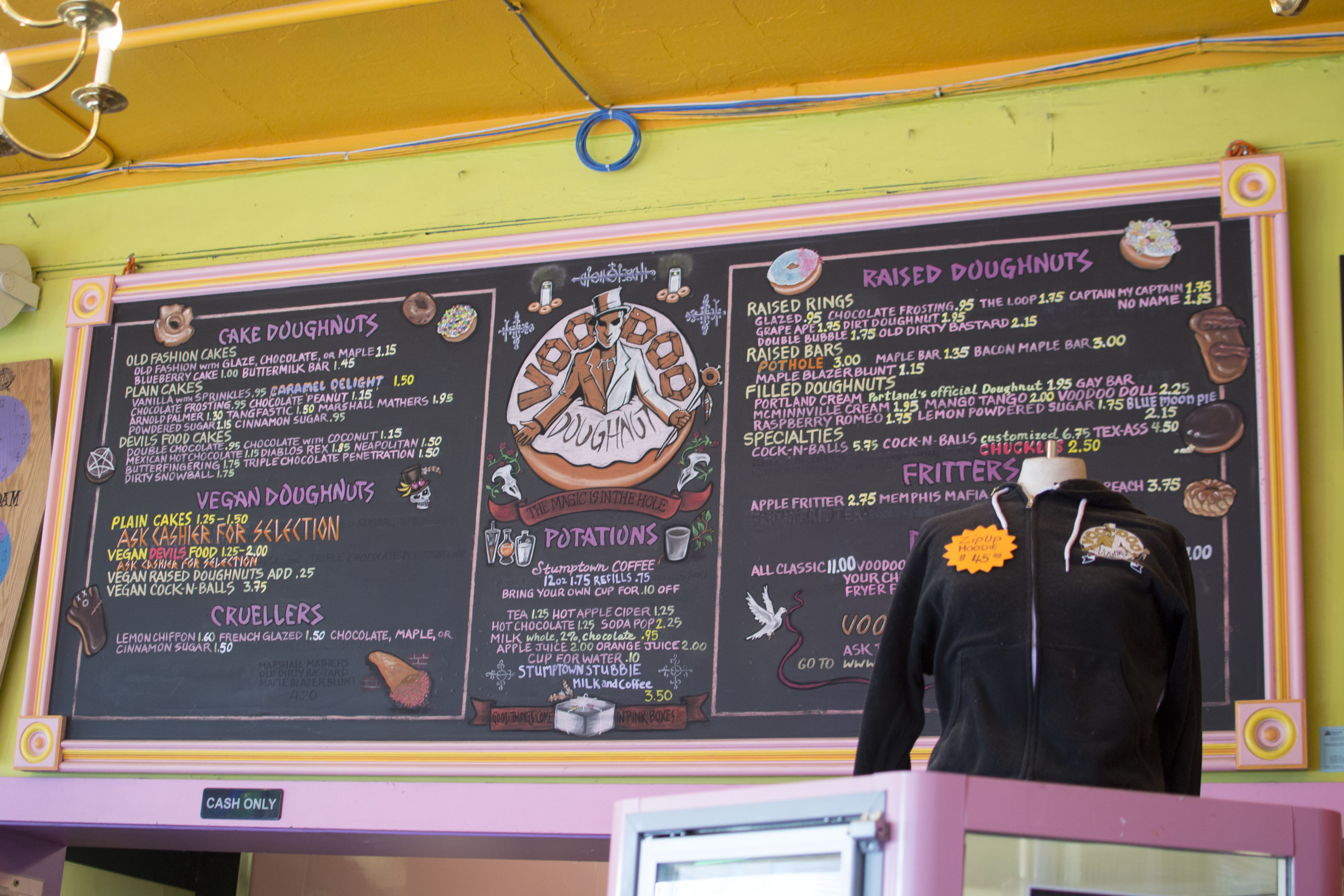 Once it was our go we knew exactly what we wanted. We ordered a variety again and headed outside to a colorful seating area to indulge on our second doughnut adventure. I honestly thought that I was going to be too full to eat more doughnuts but once I got a taste of what they had to offer, I was able to scoff it all down no problem.

Because you can’t do just one doughnut shop and VooDoo was worth every bite! 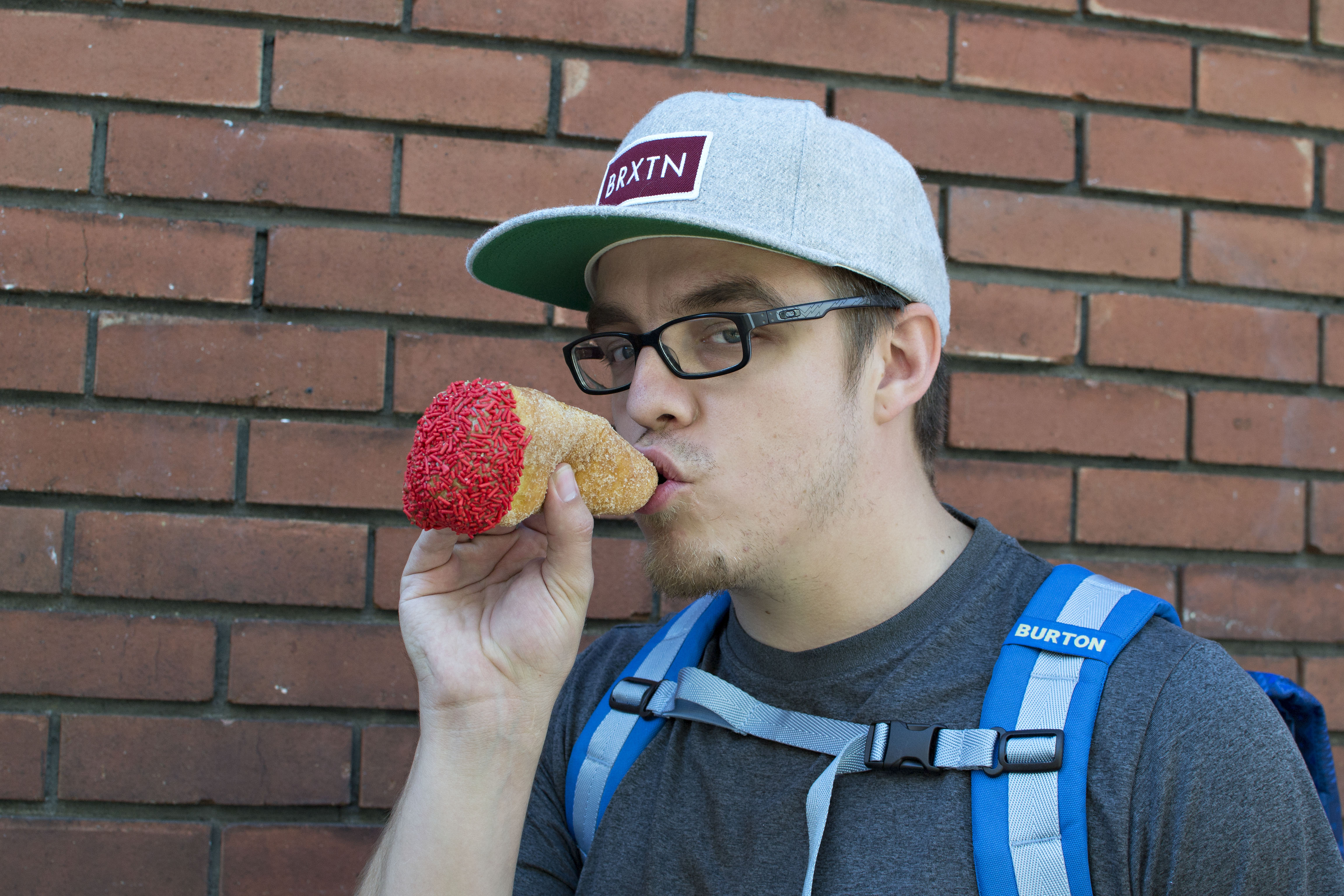 Overall, Blue Star’s donuts were what I would call a gourmet donut. They are made with quality ingredients and tasted great however, they came at a price. The line was short and they accepted all forms of payment. VooDoo’s Doughnuts, are your typical doughnut but amped up with amazingly awesome creations. The doughnuts were fresh and full of sugary goodness however, the line and wait was long and they only accept cash.

Now down to business. So who’s doughnuts were the best? In all honesty, I’m going to have to give it to VooDoo Doughnuts. Yes, they are a tourist attraction, yes, they are wildly popular because of this but for the creatively tasty combinations at a cheap price, you can’t beat it. So I leave the challenge in your hands now. Next time you are in Portland I challenge you to try both bakeries and let me know which one you prefer. Both are awesome and tasty but VooDoo Doughnuts has my fat kid heart.

Our weekend anniversary trip has come to an end sa

Anyone else counting down the days until school st

Shout out to @enterprise for hooking us up with a

I could never in a hundred summers get tired of th

If you’re working on booking your trip to Orland

So when the @medievaltimesaz opened here in Scotts