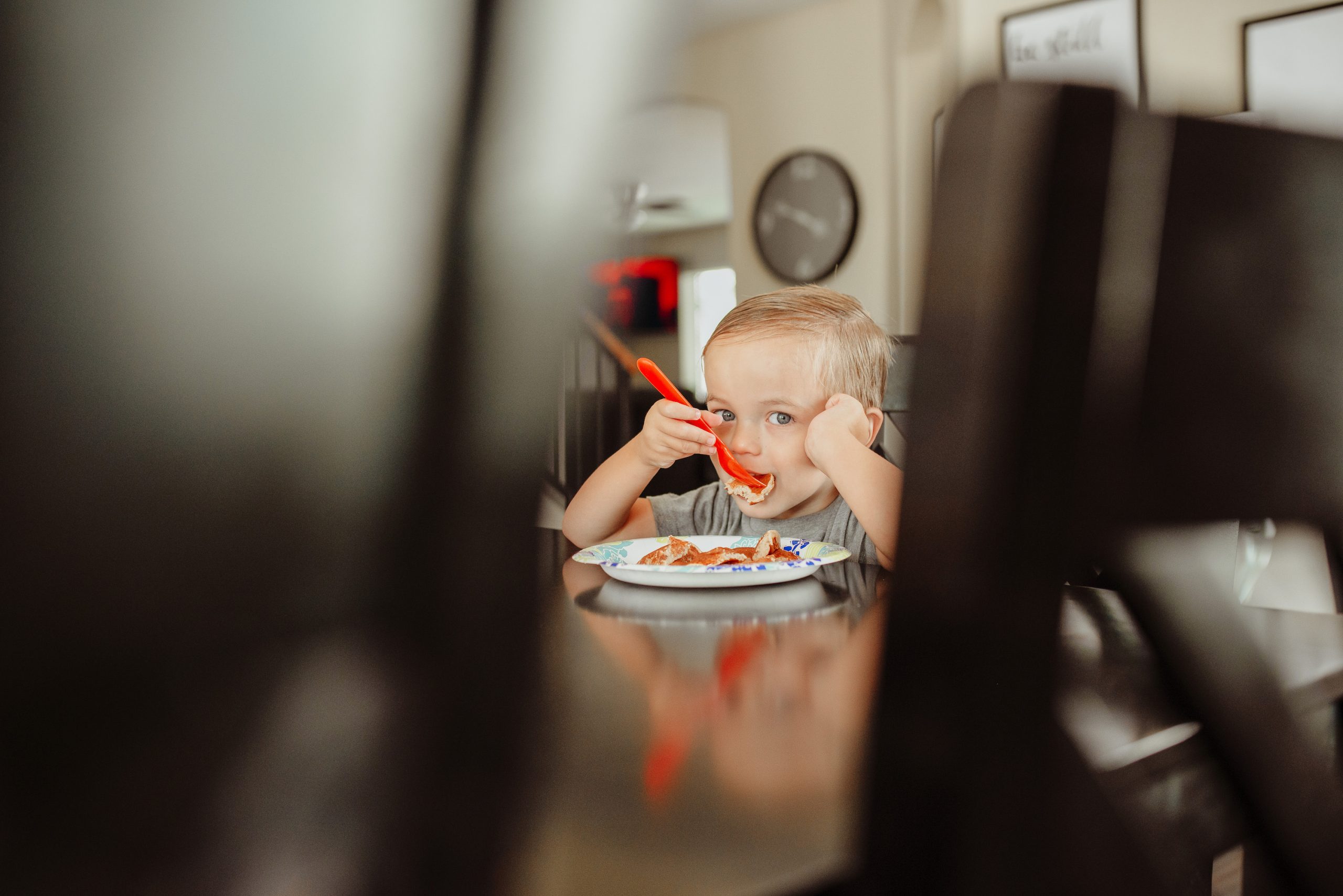 If you’re struggling to get your toddler to eat, we are going to bust all of the baby food myths that you might have and hopefully give you insight on the biggest toddler feeding mistakes you need to avoid.

It goes without saying that a parent is quite delighted when a toddler eats without any trouble. But what happens when your toddler refuses to feed? What options do you have?

Force-feeding your toddler is one of the biggest mistakes you can make as a parent. It often bears no result, and you always end up as a casualty of the war. Believe me, I’ve made this mistake MANY times.

When you start force-feeding your toddler, they can develop anxiety during mealtimes, thus making your toddler less willing to try what’s in front of them.

Instead, when your toddler refuses to eat, try to take a deep breath and relax. You should know that your toddler is probably trying to show signs of independence, and most often, this has nothing to do with the food.

As much as the spoon is often viewed by parents as a great source of comfort, let alone control for the toddler, it has been proven to seriously alter the normal development of a toddler.

According to experts, it’s advisable for parents to let their toddlers feed themselves. While it may be sad for some parents to see their toddlers struggle, it goes a long way in ensuring that your baby develops actual self-feeding skills.

Although it’s natural to offer an alternative form of food when your toddler rejects one food, you must have a limit as to what you offer. Always ensure to replace the rejected food with another nutritious alternative.

Even so, you should avoid giving your toddler too many alternative options. By doing this, you could be giving your toddler all of the power. They will quickly learn that they can avoid new foods to get to the foods they really want without giving something new a shot.

For many parents, it’s the norm to serve your toddler with large portions in the hope that much of it will be consumed. However, this is not realistic nor recommended. You should know that your toddler’s stomach is only the size of their fist. Yes, they will go through spurts where you think they are going to eat the house itself, but that doesn’t mean you should serve more than a typical toddler portion.

If you’re not quite sure how much food a toddler portion is, check out kids.eat.in.color on Instagram. Jennifer is fabulous at displaying portion sizes and toddler meal ideas.

Sometimes babies can eat a lot. Because they triple in size in the first year of life! Toddlers, however, may eat very tiny amounts of food. Less than babies, even. Because they aren't growing as much.⁣⁠⠀ ⁣⁠⠀ This is why the most powerful thing you can do with your little one is to let them decide whether to eat and how much. Don't push them to eat. Just watch them decide how much to eat.⁣⁠⠀ ⁣⁠⠀ Maybe your little one eats the plate on the left some days. That's okay. It's also okay if your child eats two bites at a meal and is done. It's normal. It's normal. It's normal.⁣⁠⠀ #kidseatincolor⁣⁠⠀ ⁣⁠⠀ ⁣✨Need help getting your kids to eat veggies? You can get my FREE picky eater guide in my bio @kids.eat.in.color.✨⁣⁣⁣⁣⁣ #kidseatincolor⁣⁠⠀ ⁣⁠⠀ #toddlermealideas #toddlerlife #kidfood #cutefood #lunchideas #portionsize ⁣#pbandj #peanutbuttersandwich #peanutbutterlover #pbj #peanutbutterandjelly #lunchideas ⁣#toddlermeals #toddlersnacks #toddlerhood #toddlerfoodideas #toddlerbreakfast #realmotherhood #positiveparenting #mindfulparenting #parenting101 #momsofinstagram #momoftoddlers ⁣

Bribing toddlers and children alike with treats is one of the oldest feeding tricks in the books. You may have very well grown up with this system as a kid too.

However, did you know that bribing your toddler with treats enhances unhealthy eating habits? If you are to reward your toddler for eating healthy, it’s advisable to offer other forms of rewards other than food. Otherwise, your toddler could grow up with a bad relationship with food thinking that you have to eat everything in front of you to have what you really want at the end.

One thing that most parents fail to realize is that the concept of feeding and being hungry is stimulated by brain activity. You can encourage your toddler to eat by eating together at the table. This way, you will avoid the hassle of running around trying to feed your child.

7.Filling UP on Juice

It’s common knowledge that toddlers like sweets. So when they refuse to eat healthy solid foods, parents often seek to offer them juice, in the hopes that it will raise their appetite.

However, try to avoid giving your toddler fruit juice. Fruit juice contains a high amount of sugar thus your toddler will not only fill up swiftly but will be unable to eat other nutritious food as well.

The boys are loving their new @dynacraftwheels Gra

If you’re a mom, you probably know chicken nugge

Currently trying to finish up Gleam from the Plate

Trying to keep these kiddos entertained while my a